Ontario’s new Minister of Natural Resources and Forestry is being accused of violating the Endangered Species Act.
On June 21, Bracebridge citizen Michael Opara charged Graydon Smith, the MPP for Parry Sound-Muskoka, with allegedly playing a role in endangering one of Ontario’s at-risk species, the Blanding’s turtle. The incident in question occurred during Smith’s tenure as Bracebridge, Ont.’s mayor, a position he held from 2010 to 2022.

Opara laid the charges three days before Ontario Premier Doug Ford announced Smith as one of his new cabinet ministers. Opara also brought charges against the town of Bracebridge, the town’s director of public works, Geoff Carleton, and the town’s chief administrative officer Stephen Rettie, all in relation to endangering Blanding’s turtles and their habitat.
Opara alleges that between June 8, and August 25, 2021, the town’s public works department disturbed a group of Blanding’s turtles, damaging their habitat by performing grading work on Peace Valley Road, where Opara lives. The site is a 15-minute drive northeast of Bracebridge.

Opara sent an email to the town on June 27, 2021, alerting Mayor Smith and a town councillor to the Blanding’s turtles in the area. Rather than putting a halt to the grading work, the public works department responded by changing the methodology, timing, and frequency of roadway operations where there was a risk of disturbing sensitive habitat, and erected turtle crossing signs in the area to advise equipment operators of the existing habitat, Bracebridge CAO Stephen Rettie wrote in a letter.
The charges have yet to be tested in court, but a Justice of the Peace did sign off on them, setting a court date for September 21 at the Bracebridge Courthouse.

In response to the allegations against the town of Bracebridge, Sarah Hahn, the town’s legal representative, wrote in an email that “these charging documents do not set out the details of any of the alleged offences and we are confident that they will be thrown out once a Justice of the Peace reviews the matter…The fact is, and the evidence will show, that the Town acted diligently and appropriately in completing required road works within the vicinity of the turtle habitat. It is unfortunate that town resources must now be used to respond to these baseless accusations.”
​
Despite repeated attempts to contact him, Graydon Smith did not respond to a request to comment on the allegations by the time of publishing this article.
David Donnelly, an environmental lawyer based in Toronto, says that the Justice of the Peace signing off on the charges and setting a court date proves that there is legitimacy to the charges. “The Justice of the Peace cannot and should not swear any information or issue process in cases that are lacking evidence,” Donnelly says.  Donnelly is not involved in the Bracebridge case but has participated in similar prosecutions, many of which have proved to be successful and resulted in changes to the law.
Once the accused appears in court on September 21, it is possible that charges could be dropped, if the individuals, such as Smith, can demonstrate that they weren’t involved in the decision-making relevant to the case, Donnelly says. “But under the Endangered Species Act, it’s important that anyone who was responsible for the actual act or the decision making leading to the destruction of the endangered species be held accountable,” Donnelly says.

​Muskoka Royale fight heads to the next level
BY MATT DRISCOLL ON SEPTEMBER 8, 2021

​Despite approval by the municipality earlier this year to proceed with the proposed Muskoka Royale College, opponents are still hoping they can put the brakes on the project as it heads to the Ontario Land Tribunal later this month.
In January the Town of Bracebridge approved rezoning of the 450-acre site, which is located just east of Stephen’s Bay, to open the door for construction of a boarding school.

The developer, George Chen, says that on full build-out, Muskoka Royale College will accommodate up to 1,800 students over a gradual period of 15-20 years. He says the development of this school is expected to provide the equivalent of 200 full-time construction jobs over a five-year period, and 120 full-time, permanent professional jobs in teaching and administration and other positions.

However, opponents of the project claim it is being built in an environmentally sensitive wetland area which could have catastrophic results for the local ecosystem.

“The politicians are going in a way that’s contrary to the way the science is pointing,” says Michael Appleby, who helped found the South Bracebridge Environmental Protection Group (SBEPG). The group formed when the proposal first came to light and they have since collected more than 5,000 signatures opposed to the development, says Appleby.
“I’m a science-based person.  I rely on facts and it’s stunning to me that none of the information sent to the council was given any weight.  It’s stunning on one level and sad on another,” he says.

In September, 2017, Michalski Nielsen Associates Limited was retained by Muskoka Royale Developments Inc. to update their previous natural environment work on the westerly half of the Muskoka Royale property, in support of the development of a senior school and future elementary school campus. They concluded that the proposal was appropriate for the area in both scale and intensity.  Appleby says that study was deeply flawed.

“Consider that the subject lands have documented 204 species, with seven of those species on the Endangered Species list, but because their habitat locations are still unknown, the impact from any site development cannot be clearly understood,” said Appleby in a letter to Town council.  He also points to letters of support from Ontario Nature and Barry Warner, a professor of Earth and environmental sciences at the University of Waterloo.
​
After the town decided to approve the project earlier this year, the SBEPG filed an appeal with the Ontario Land Tribunal for both the rezoning approval by the Town of Bracebridge and the District of Muskoka’s change to the Official Plan Amendment.  The Case Management Conference has now been set for September 20, 2021 at 10 a.m. by video conference.

Controversial proposed boarding school in Bracebridge heading to tribunal
​
Having passed through both Town of Bracebridge and District of Muskoka councils, the rezoning and official plan amendment for the Muskoka Royale project is being appealed to the Local Planning Appeal Tribunal. This is what Bracebridge Mayor Graydon Smith had anticipated would happen when the decision was made at town’s planning and development committee with the expectation of ratification at the Jan. 20 council meeting...READ MORE HERE
By Mary Beth Hartill - Reporter - Fri., May 28, 2021 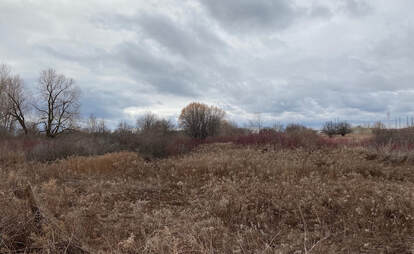 THE WETLAND WON!
​The rise and fall of the Duffins Creek MZO
Less than a year ago, Pickering city council voted to request the zoning edict. This week, it voted in favour of asking the government to rescind part of it. So what changed?
By Marsha McLeod - Published on Mar 23, 2021​
​
EVEN AMAZON KNOWS IT IS WRONG TO BUILD ON A WETLANDS!
Amazon says it's not building new warehouse on Pickering wetlands citing environmental concerns
BY LUCAS CASALETTO  Posted Mar 12, 2021 4:04 pm EDT
NDP leader Andrea Horwath says the decision by Amazon is the right one but the fight isn’t over. “You don’t bulldoze a wetland to build a warehouse,” said Horwath. “… We need the Doug Ford MZO scrapped – or this vital wetland remains at risk of being paved over for whatever the highest bidder wants to build there.”
Liberal leader Steven Del Duca says everyone except the Ford government gets that destroying our natural environment is bad economic policy.
Green Party leader Mike Schreiner said, “even Amazon recognizes it’s wrong to build a warehouse on provincially significant wetlands.
CLICK HERE TO READ FULL ARTICLE 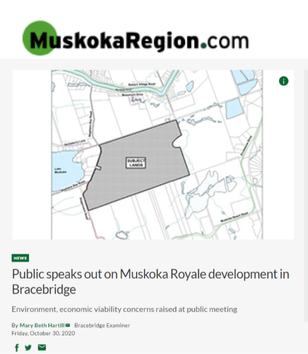 Public speaks out on Muskoka Royale development in Bracebridge - October 30, 2020

How important is that Muskoka wetland? - November 4, 2019 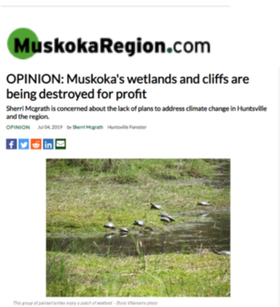 ​OPINION: Muskoka's wetlands and cliffs are being destroyed for profit​ - July 4, 2019 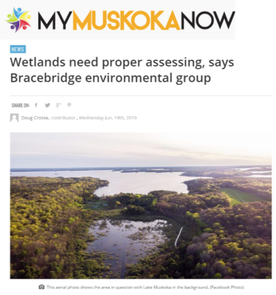 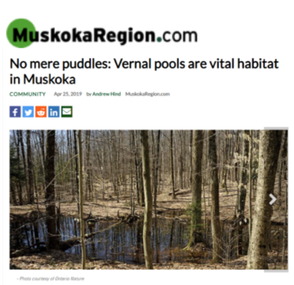 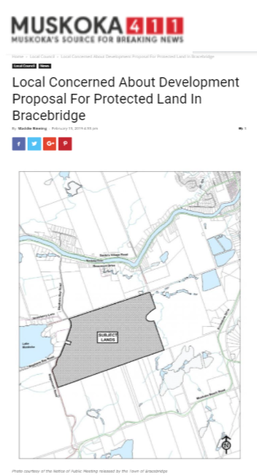